What is Global Positioning System (GPS) ?

What is Global Positioning System (GPS) ?

Also known as Navstar, GPS is the leading global navigation system today. GPS or Global Positioning System is a satellite dependent navigation system made up of a network of total 71 satellites. Although officially the number satellites launched in October 2015 were 71, the actual number of operational satellites are 31 (1 is in reserve, 1 unhealthy, retired 36 and launch failure 2). The minimum number of satellites for a full constellation is 24 and is operational 95% of the time, the current number of satellites exceed this . The target number is 33 and decommissioned reserves are available to maintain the numbers. GPS was originally intended for military applications, but in the 1980s, the government made the system available for noncombatant/civilian use. GPS works anywhere in the world, irrespective of weather conditions , 24 hours a day. There are no hidden charges required for using GPS satellites system.

All GPS satellites rotate the world twice a day in a specific orbit and transmits information via signals to the earth. GPS receivers take this information and use trilateration to calculate a particular location. Essentially, the GPS receiver relates the time through a signal transmitted by a satellite which was received. The time difference tells the GPS handset how far away the satellite is. Now with distance measured from a few more satellites, the receiver then calculates the user’s position and shows it on the user’s handset electronic map.

A GPS receiver must be locked on to a signal of at least total 3 satellites to calculate a 2-D position (latitude and longitude) and track movement. If four or more satellites are in view, the receiver can determine the user’s 3-D location (latitude, longitude, and altitude) and track movement. After the user’s position has been determined, the GPS unit can calculate other information, such as speed, bearing, track, trip distance, distance to destination and more.

The total 24 satellites creating the GPS space segment are orbiting the earth about 12,000 miles above the earth. They move and make two complete orbits in less than 24 hours. These satellites are traveling at speeds of roughly 7,000 miles per hour. Using solar panel GPS satellites generates power. A backup of batteries are kept on board to keep them running in the event of a solar eclipse. 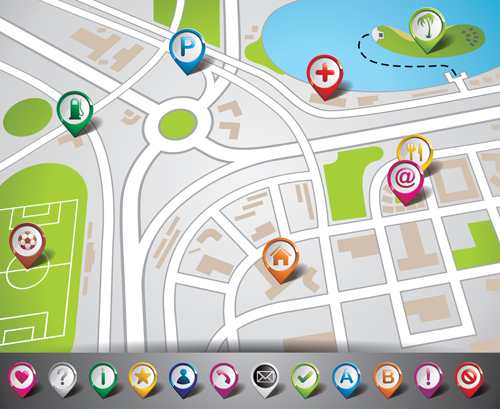 Two low power radio signals are transmitted by GPS satellites, called L1 and L2. Civilians always use L1 GPS frequency of 1575.42 MHz in UHF band. The signals travel by line of sight, meaning they will pass through clouds, glass and plastic but not through solid objects such as buildings stones or mountains.